Nothing But The Truth!

Modern Halotherapy has its origins from the salt mines and caves of Europe especially Wieliczka Mine, were ideal conditions below the Earth’s surface where air pressure and circulation, humidity and temperature affected the quality of the environment. In this environment, miners were unknowingly receiving many natural health benefits by breathing in the salt particles. Considering that mining jobs were usually recognized as dangerous to life and health, salt miners seemed to unusually thrive on good health condition. They rarely had any respiratory issues and also looked younger due to great skin appearance. Today it’s still considered beneficial to a great majority of individuals due to use these natural minerals of nature that are present in every cell of the human body.
• 1838 – Dr. Feliks Boczkowski opened the first health resort facility at the Wieliczka Salt Mine in Poland offering salt baths.
• 1949 – German physician D. K. H. Spannahel after observing that people hiding in salt caves and mines during WWII had significant respiratory health benefits, performed studies and laid the foundation of modern Speleotherapy or Halotherapy.
• 1958 – Professor Mieczyslaw Skulimowski became the official physician of the “Wieliczka” Salt Mine and started regular treatment of patients in the salt chambers.
• 1964 – Wieliczka Salt Mine in Poland expands into the underground “Kinga Allergy Treatment Spa”. 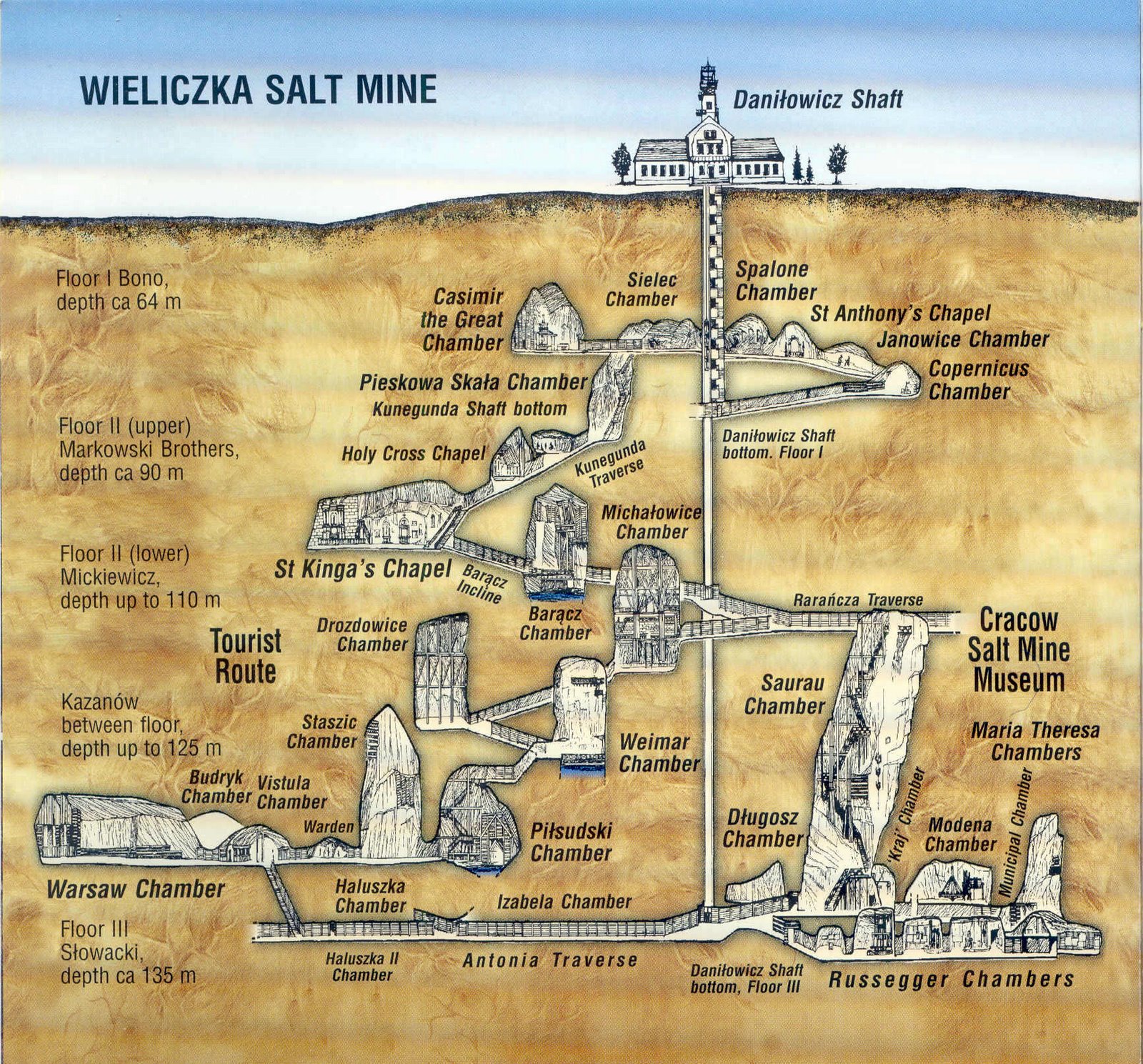 Map of the underground salt mine

• During World War II, the shafts were used by the occupying Germans as an ad hoc facility for various war-related industries.
• The mine features an underground lake; and the new exhibits on the history of salt mining, as well as 3.5 kilometers (2.2 mi) of touring route for visitors (less than 2% of the length of the mine’s passages) that includes historic statues and mythical figures carved out of rock salt.
• The environmental climate of the “Wieliczka” Salt Mine is fundamentally different from the climate on the surface of the earth. The special curing properties of salt chambers are determined, among others, by a high saturation of air with a sodium chloride aerosol, produced by the constant process of leaching and weathering of the rock salt. The underground aerosol is extremely clean in microbiological and palynological terms.
The activities of the “Wieliczka” Salt Mine Health Resort are addressed primarily to people suffering from diseases of upper and lower respiratory tract, such as:
• bronchial asthma
• chronic obstructive pulmonary disease
• recurrent nose, sinuses, pharynx and larynx conditions
• chronic bronchitis and pneumonia
• allergic diseases
A fundamental role in the mechanism of treatment is performed by a unique microclimate, characterized by:
• exceptional bacteriological purity
• constant air temperature (14°C – 19°C)
• high air humidity (approx. 60-75%)
• high sodium chloride contents (24 mg/m3) and microelements such as magnesium, manganese, potassium, and calcium.